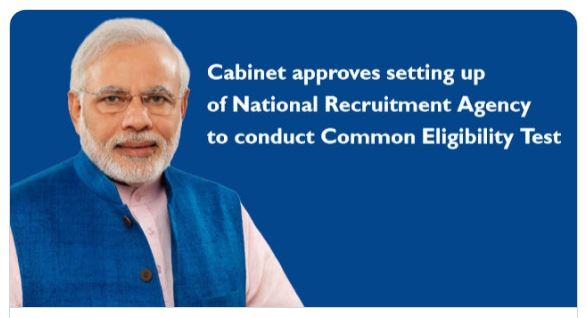 The Union Cabinet has approved the proposal to set up a National Recruitment Agency to conduct ‘Common Eligibility Test’. Now instead of different agencies for government jobs, the same agency will conduct the examination. There are currently about 20 agencies in the country that conduct examinations.

Giving information, Union Minister Prakash Javadekar said that this decision was taken in the meeting of the Union Cabinet chaired by Prime Minister Narendra Modi. After the meeting, Information and Broadcasting Minister Javadekar told reporters, “Youngsters have to take many different exams for jobs at present. There are about 20 recruitment agencies for such examinations and the candidates have to go to other places to take the exam as well.

Union Minister Jitendra Singh termed the decision as historic and said that initially the examinations of the three agencies will come under the ambit of the National Recruitment Agency but later other agencies will also be brought under its purview. He said that this will relieve candidates from rural areas, women and the differently abled from having to travel long distances to take exams for various jobs. Initially, it will cover the Railway Recruitment Examination, Recruitment Examination of Banks and Staff Selection Commission (SSC). He told that the marks obtained in this examination will be valid for three years. For conducting the examination, at least one examination center will be set up in every district. The National Recruitment Agency (NRA) will screen the candidates for Group B and Group C (non-technical) posts through the Common Eligibility Test. The NRA will be a society with a president and secretary level in government. Representatives of the Railway Recruitment Board, Staff Selection Commission and Institute of Backing Personal Selection (IBPS) will join its governing board. According to the official statement, the NRA will be an expert body with state-of-the-art technology. However, Singh said that the CET scores provided to the candidates appearing in this exam in the coming time can be shared with other recruitment agencies of the Central Government, State Government, Union Territories, Public Sector Enterprises, Private Sector. . He said that this can save time as well as the time spent in recruitment. The government has sanctioned Rs 1,517.57 crore for the formation of the National Recruitment Agency and will have its headquarters in Delhi. Apart from setting up the NRA, examination centers will also be set up in 117 aspirational districts of the country. Union Minister Jitendra Singh said that the initial plan is to set up 1000 examination centers across the country.

Recruitment for 138 posts of Assistant Audit Officer, apply by May 15 (BPSC AAO Recruitment 2021 ).